This morning, I just found out about #tidytuesday and I figured it would be a fun thing to play with.

For my first foray into tidytuesday, we have data on Bob Ross’s paintings during his show. The data were compiled by fivethirtyeight and reported here.

The data are available here. On the info page for the data, they show how to load the data and give an example of some basic tidying. I’ll do that below:

There are a couple of paintings that are named the same thing.

In my professional work, I perform social network analysis, so let’s go ahead and look at networks of elements in Bob Ross’s paintings!

To get us looking at social networks, we first need to take the data from this wide format and turn it into an edge list. The edge list will connect each painting to every element that is inside it. From there, we can get a picture of what the network of paintings looks like! 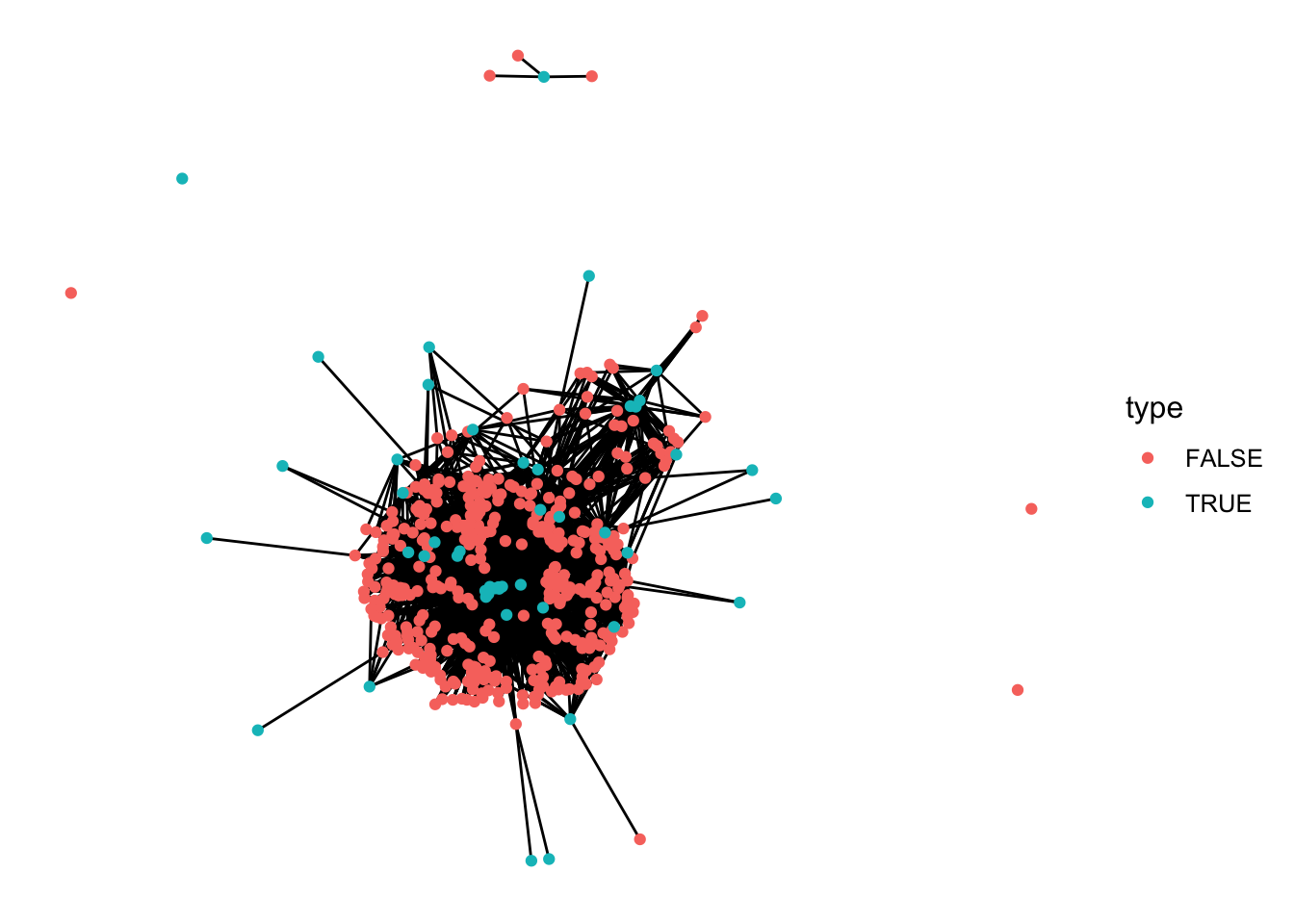 That’s real busy! It looks like there are a few episodes that only have a few elements and some episodes that have many elements in it. There’s also that one episode that shares three elements with another episode and no others.

Let’s see if we can clean this up a bit! First, i’ll connect episodes by how many elements they share. 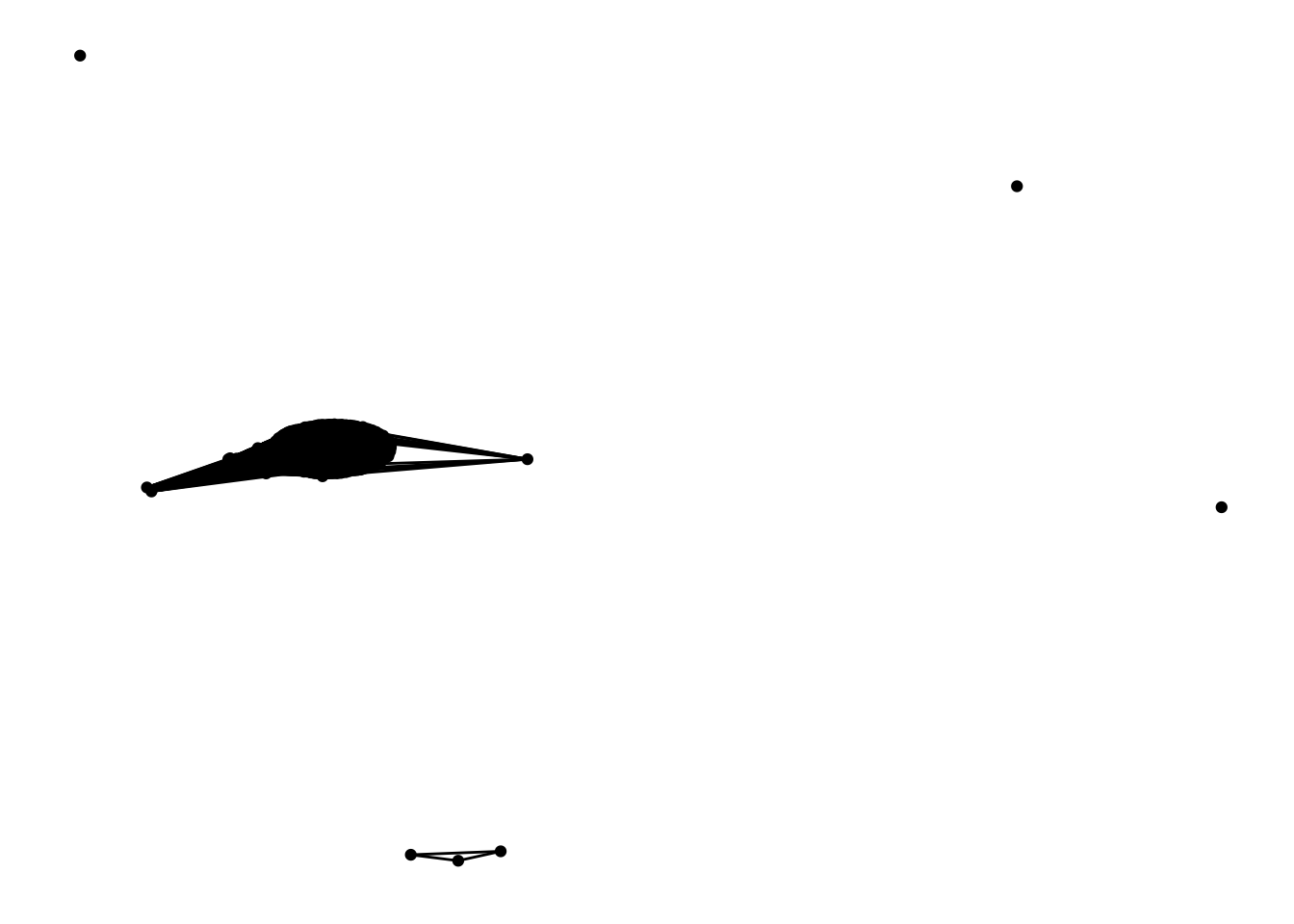 Not much to look at. Or better yet, Ross’s paintings tend to share something in common with other paintings.

Now to plot! I’m going to build these plots with a cutpoint though, because otherwise they become very unweildy. 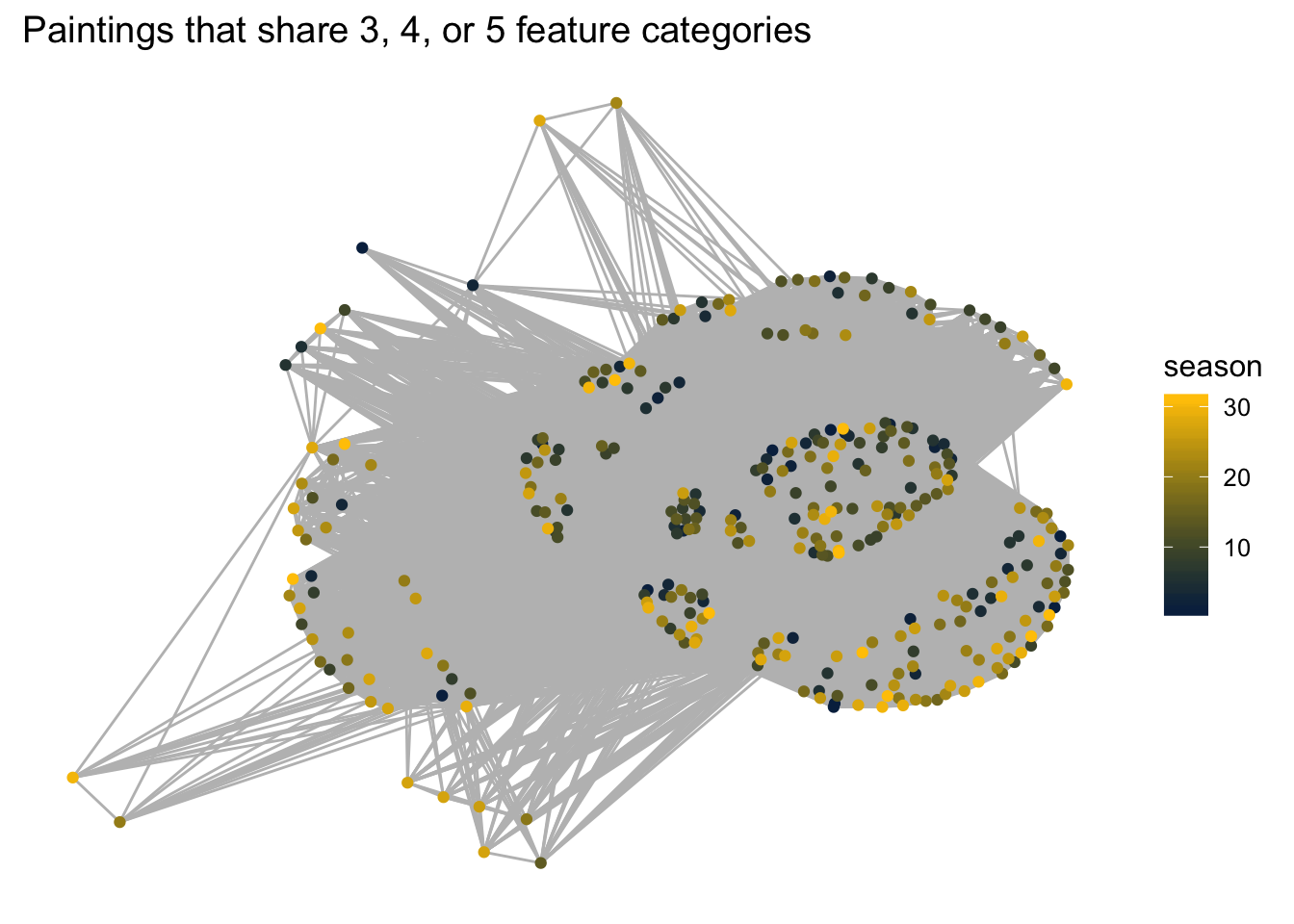 Above, I’ve colored nodes by season and only shown connections between episodes if those episodes share more than two classes of feature (e.g. two episodes have a sky feature, tree and plant feature, and a man-made feature).

What happens if we filter to only show edges if two espodes share 4 features? 5? 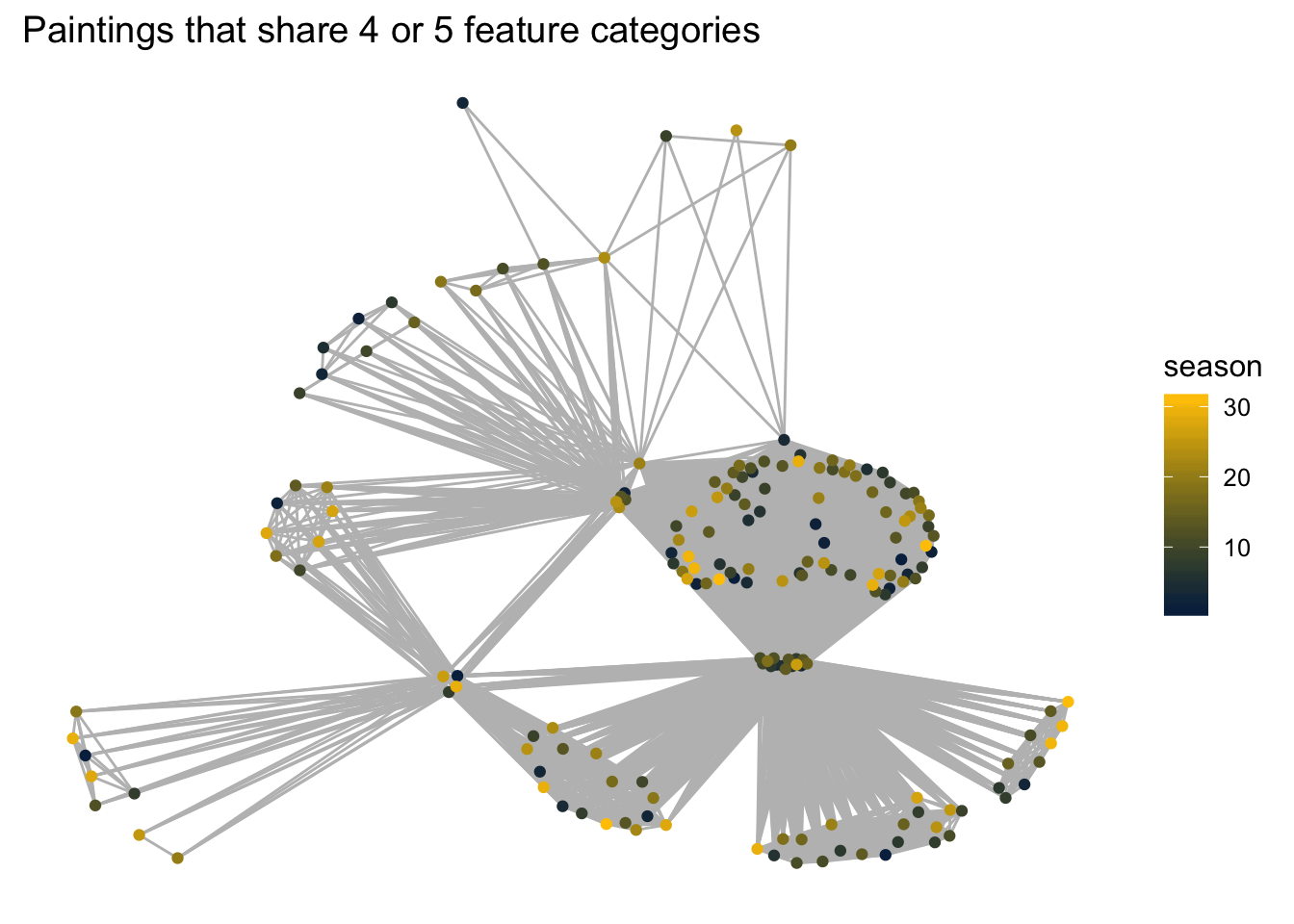 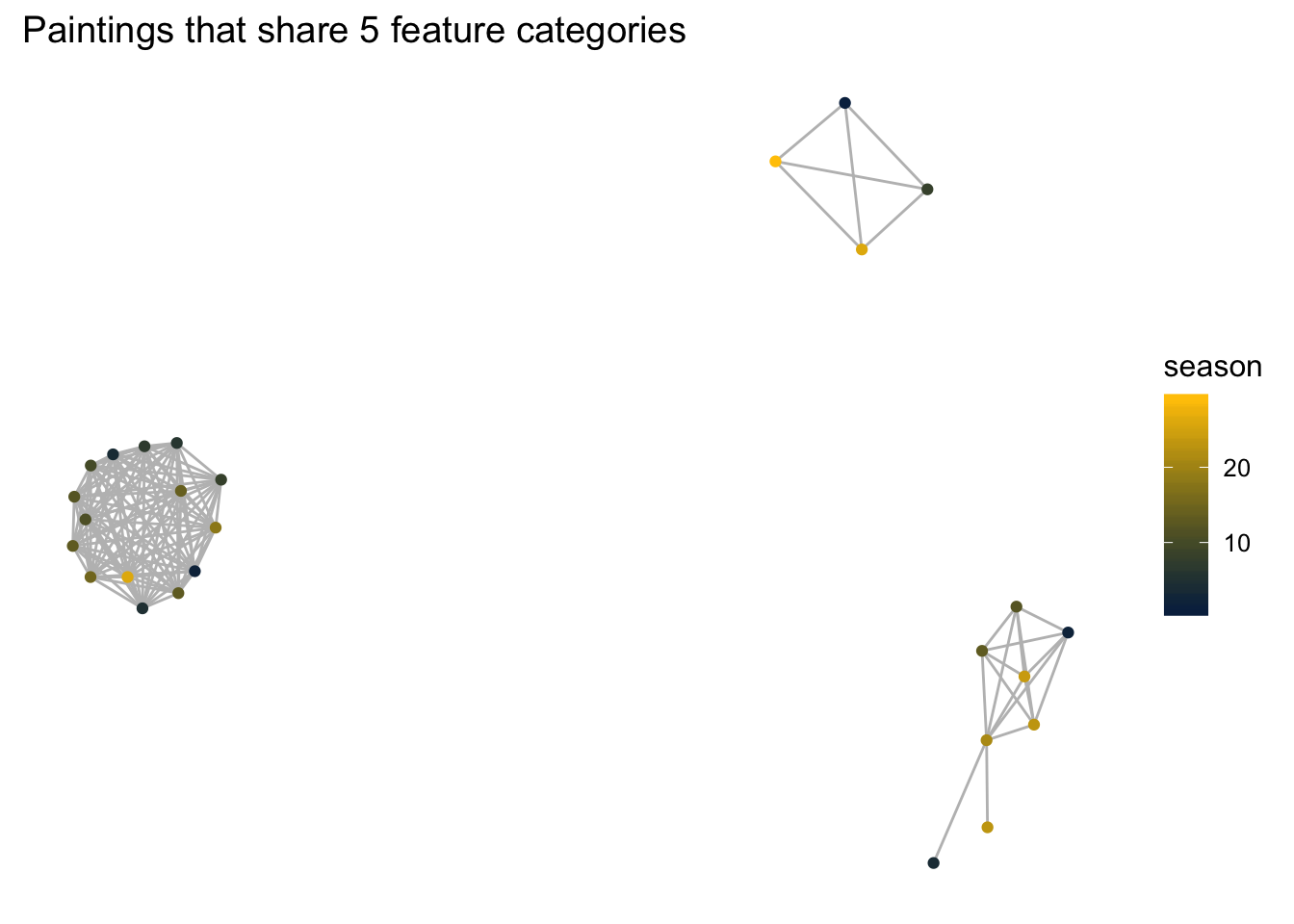 Now looking just at paintings that share 5 feature categories, it can really be seen that there is a central set of themes that is very common accross seasons. What are they?

All (or near all) of these paintings have an aquatic element, a general nature element, and trees and plants. So the real defining factor between the three groups in the plot above probably has to do with the other four categories. Next time I play with these data, I’ll look at that and do a deeper dive on components of the network of Bob Ross paintings.

I go on adventures and analyze data. When I’m away from my desk I make beer and build things with wood.

Sep 9, 2019
A few weeks ago the wonderful RWeekly mailing list introduced me to a new type of plot - the point density plot. Wonderfully, the ability to make this plot has been added to the R community in the form of a new package, ggpointdensity. From the top line description, it’s a cross between a scatter plot and a 2D density plot. The motivation for creating the package and using this new plot is that the points in scatter plots can overlap one another while the alternative density plots lose the resolution given by plotting indiviudal points.

Aug 8, 2019
This is a continuation of my work on the codeacademy data science independant project #1: Watching the Stock Market. My first post on the subject explores how I put gathered the stock data. In my second post, I explored the data using basic sql queries (and put my sql code out into the world for the first time!) After completing the basic challenges from my last post on the topic, there are intermediate and advanced challenges too while playing with these stocks data.

Aug 8, 2019
This morning, I just found out about #tidytuesday and I figured it would be a fun thing to play with. For my first foray into tidytuesday, we have data on Bob Ross’s paintings during his show. The data were compiled by fivethirtyeight and reported here. The data are available here. On the info page for the data, they show how to load the data and give an example of some basic tidying.

Jul 7, 2019
This is a continuation of my work on the codeacademy data science independant project #1: Watching the Stock Market. My first post is here. In this project, the basic tasks are: What are the distinct stocks in the table? Query all data for a single stock. Do you notice any overall trends? Which rows have a price above 100? between 40 to 50, etc? Sort the table by price. What are the minimum and maximum prices?

Jul 7, 2019
I just started working on teaching myself sql and after completing the codeacadmey sql lessons, there are links to independant projects. My goal is to work on these independant projects in the coming weeks. To look ahead (and have a place to find them later outside my pocket list) here’s a list to all five I plan on working on: Watching the Stock Market Explore a Sample Database Education & Census Data Home Value Trends Analyze Airfare Data The first project has us working with stock market data.

How often does the Senate Vote In Palindromes?

Jan 1, 2018
Every Friday, five thirty eight comes out with two logic, math, or probability based puzzles - one quick to solve and one that takes a long time to solve. Although I don’t always get a chance to partake, thinking about them is always fun. This week’s quick puzzle related to a problem I’m trying to solve in the office, so I thought I would give this one a try. Taken from their site, the puzzle goes like this:

Dec 12, 2017
In my professional life, I manage and analyze data on a team that studies the social networks surounding children with autism. The purpose of this post is not to discuss that work in depth, but rather to show how to quickly and easily import one type of data I work with into R. For social network analysis, I use the package igraph. The type of data I’m going to talk about iporting today is egocentric network data.

Dec 12, 2017
In my last post I showed how using the package httr, You can access the RateBeer API to get information about beers made by a brewery. When I left off, I showed a problem - the API only shows 10 beers at a time. Today, I’m going to show how we can get more beers at once. After that, I’m going to show how we can use the API, rvest, and purrr to get beers from all the brewers around me.

Dec 12, 2017
A few months ago, I was talking with a friend of mine about the idea for this blog and how I wanted to use data science to explore beer. He suggested that I use the blog as well as beer to learn something new about where I live. So I ask, what can beer teach me about Philadelphia? The first thing I need? Data! Oddly enough, it’s actually pretty challenging to get access to high quality, current beer data.